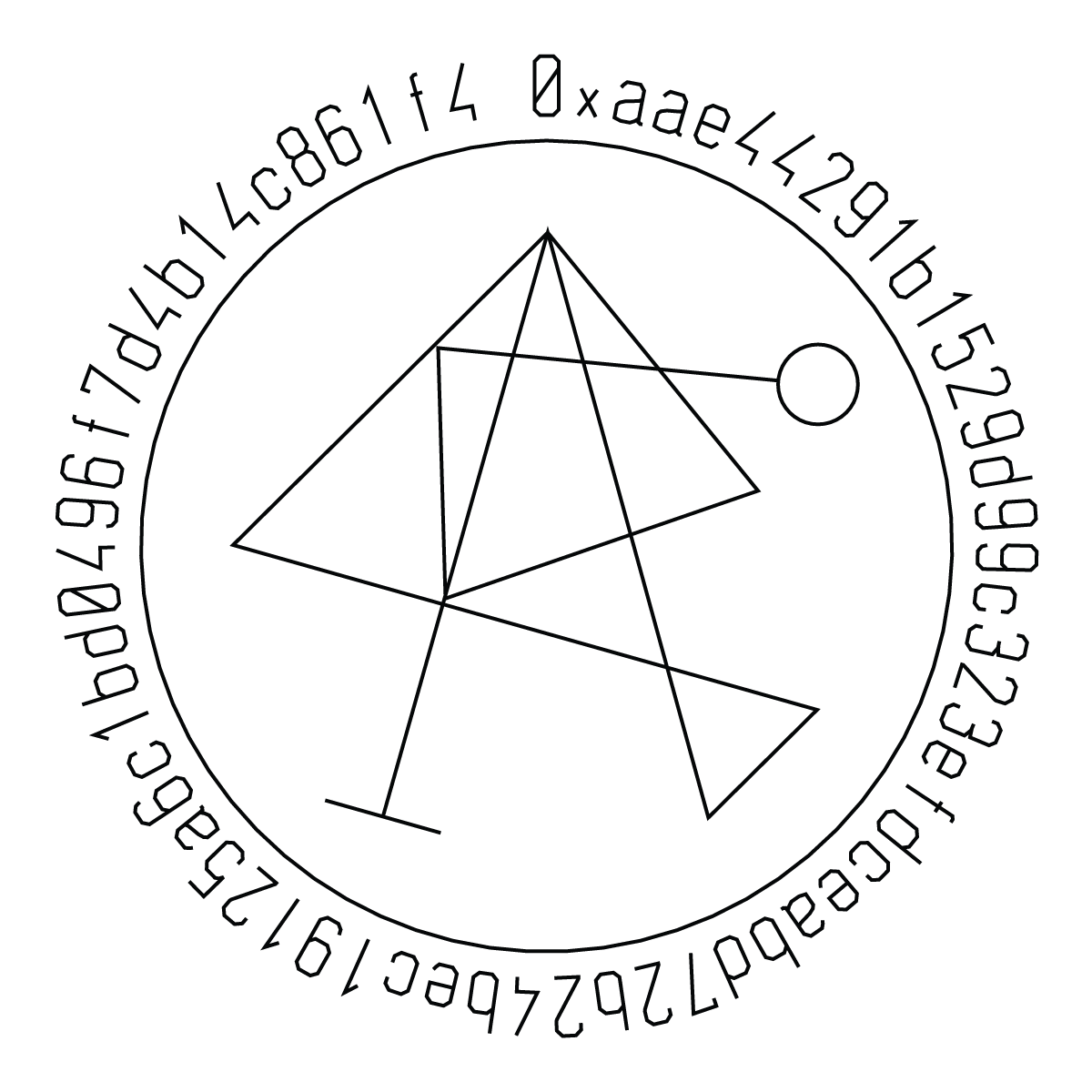 Claves Angelicæ is an installation and procedural system that enables a participant to inscribe a magical Word onto the Ethereum network.

The seven step process is designed to collect and transmute the participants’ input data into an encrypted message. For the participant to cast their Word they must transmit Ether to a preselected set of charities. Once the spell has been cast and verified by the consensus pool, the transaction signature’s hash is returned, parsed, and passed into a sigil generating algorithm. The participant receives an inked paper talisman authored by a mechanical drawing machine as a tokenized sigil of their spell.

Cryptography and magic have a deep, intertwined history dating back to the origins of writing. During the European dark ages monastic sects bore the responsibility of keeping the rites of the sacred ancient mystery cults of Egypt and Greece intact. However, in doing so they ran the risk of being burned at the stake for committing crimes of heresy. Some of them developed cryptographic systems to encode these secrets into their manuscripts. It was not only the monks working with ciphers but also natural magicians and occultists. The latter groups weren’t only using cryptography to obfuscate sensitive information, but also to devise keys and linguistic frameworks for communicating into the Ethereal realms. By devising new linguistic schemata these magicians believed that they could access the preternatural realms outside the worlds they were exploring in their scientific pursuits. Although the blockchain space is largely secularized, the principles of the Ethereum network is a manifest dream of the ancient magi. Magicians are the original cipherpunks. Solidity, Serpent, and LLL are grimoires (Latin ‘grammaire’) or books of magical grammar. Smart contracts are daemons invoked to enact our Will. DAOs (Decentralized Autonomous Organizations) are archons governing and managing resources from the Ether. Pentacles are cryptographic tokens for binding daemons and storing value. Magical codes of ethics are emblematized in protocol authorship. Salt, one of the alchemical primes, is also used in cryptography where it serves as random data that is used as an additional input to a one-way function that ‘hashes’ the Word. Sigils are graphical databases used for storing enciphered information.

For common parlance let’s define what a sigil is: the encoding of desire or intent into a symbol. The Latin sigillum, means ‘seal’, though it may also be related to the Hebrew הלוגס (segula meaning ‘word, action, or talisman’). A few examples of sigils are Johannes Trithemius’ experiments in ‘Steganographia’, Giordano Bruno’s mnemonic devices, and John Dee’s Sigillum Dei Aemaeth.

Centralized authorities and trusted-third parties (churches & banks) shape our cultures into monotheistic tendencies (e.g. “In God We Trust”) where priests or bankers arbitrate and broker access to the value system. Whereas decentralized systems allow for a plurality of deities to inhabit the Ether and entrust magicians to enact their Will without intermediation. 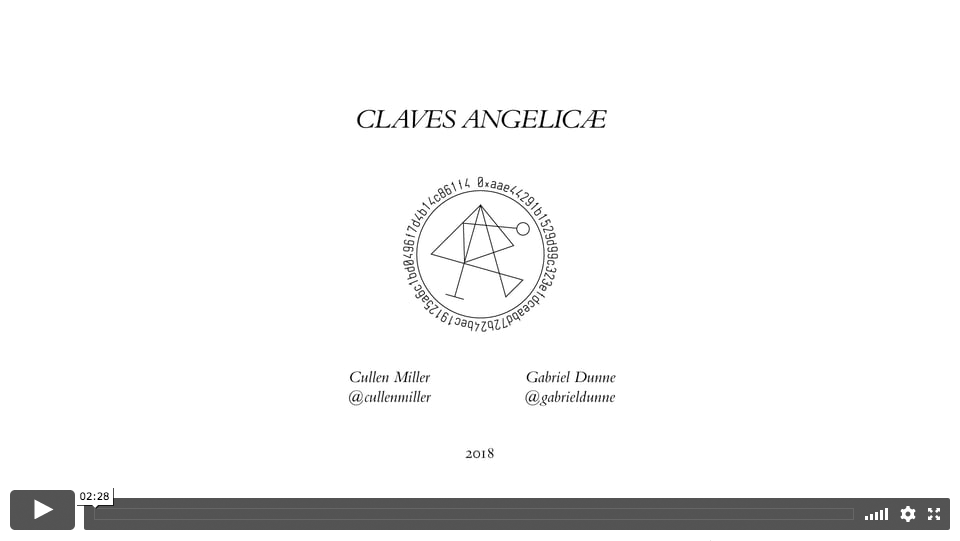 Claves Angelicæ is a seven step process to guide one through the process of securely constructing a Word with an ‘Alphabet of Desire.’ This Alphabet of Desire is a mediation with one’s own libidinal framework. Magic has many aspects, but it primarily acts as a dramatized system of psychology. It is the science and art of causing change to occur in conformity with one’s Will. A magical spell is quite literally the spelling out of a Word. Once the Word is constructed within oneself it is set in motion by bringing it forth into grammar and sound. When completed one must seal it and cast it out into the Ethereum network.

Everyone has a natural fortress within themselves: the Soul impregnable. However beyond this central citadel, one also has outerworks which are vulnerable and susceptible to violation. Banishing rites are twofold: Firstly, it provides a cleansing and maintenance of the walls of the fortress. Secondly, it operates as a firewall for the body and the space surrounding it. This allows for secure outbound transmissions of magical Words (spells) while fortifying and consecrating the Magician in a bastion away from exploits and malicious attacks.

“In the beginning there was the Word (Logos).” A Word is twofold: internal and uttered. An internal Word is a conception of the mind, and motion of the soul, which is made without a voice. The Word is to be silently contemplated. The Logos is the generative principle with which impregnates potentiality. The semiotics of magic are thus: the map is not the territory. The Name is the thing itself.

The Word is twofold: internal and uttered. An uttered word is the internal Word brought forth through breath into vibration. Through this act of locution the Will sets the Word in motion. Incantation is derived from the Latin ‘incantare’ meaning “to enchant, cast a spell.” The infamous magical word ‘Abracadabra’ is derived from the Aramaic meaning “I create as I speak.” All communication contains sorcery because humans use a variety of noises to create a semantic grid projected upon incidents and events. These grids are generally called languages. Language is the material mediation between subconscious desires and the conscious mind. And Will is encoded into language for transmission. It is by Will alone that the Word is set in motion.

Sealing is the act of encrypting a message. This is done through the process of transmuting the Word into a graphical sigil by tracing the path on the map of the Alphabet of Desire. The map that underlies the path that the line follows is defined by the Rosy Cross and holds the majestic alphabet of the ancient magi.

Once the Word has been synthesized and prepared for secure transmission on the network it must be activated by casting it out. Once the spell is cast a smart contract daemon is invoked to route the Word to its destination. This destination address is assigned by selecting a cardinal direction to where the Word is to be cast. After the spell is completed the Word is inscribed onto the distributed ledger of the Ethereum network.

The daemon listening for the cryptographically signed acknowledgement of transfer is animated to draw the Sigil onto a paper talisman with a mechanical writing machine when it can verify that the Word has been authored. The Sigil is both sign and signifier of the encrypted Word’s transaction record on Ethereum’s public ledger.

Sigils are generated with a graphical encryption algorithm based on the Rosy Cross. 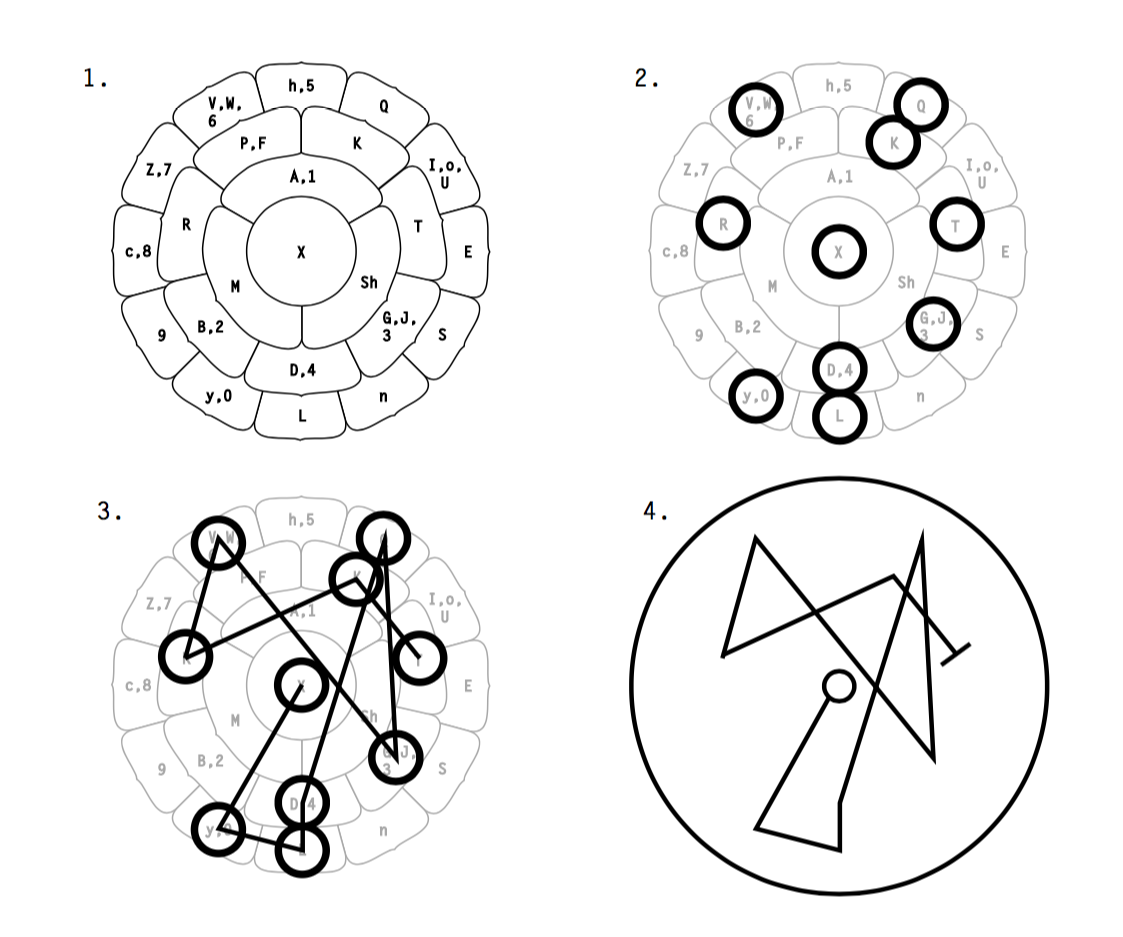 Physical installation comprises of a podium within a 12’ chalk circle. 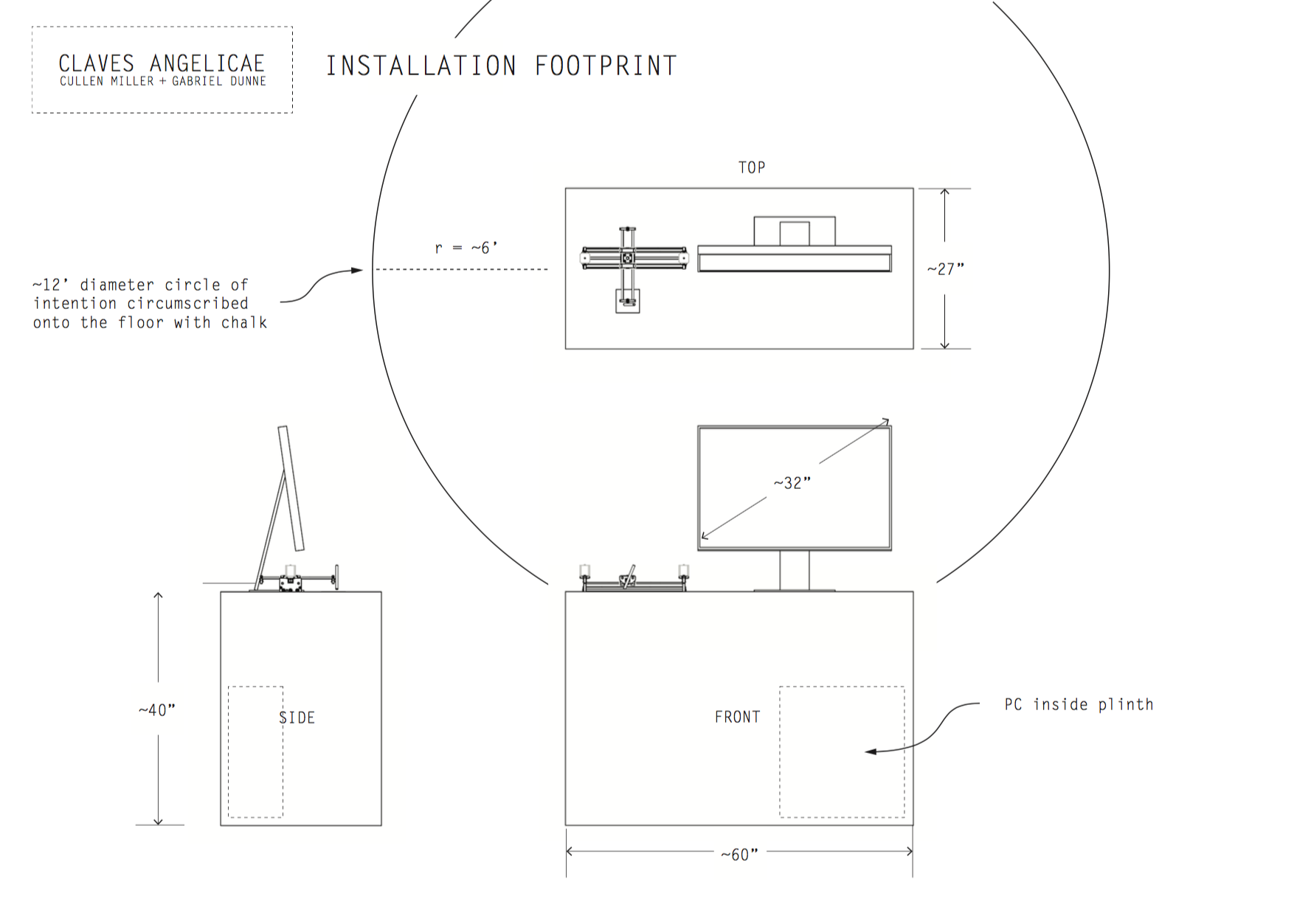 In order to cast their Word or desire to Ethereum’s distributed ledger and complete the experience, the participant is required to prepare and be familiar with using a mobile wallet that allows them to send an amount of Ether that, at minimum, covers the costs of the transaction, which will vary depending on the network load. Some mobile Ethereum wallet solutions include Trust Wallet, Toshi, Ethereum Wallet by Freewallet, Coinbase, and more.

Gabriel Dunne and Cullen Miller are collaborators often found working within the confines of art. Respectively drawing from their backgrounds in design and music composition their practice is an assemblage of various forms of media finding mutuality in a search for the Outside.

Their projects and performances are typified by creating technical systems that defy bounded rationality. Their work probes into subconscious immaterial processes by leveraging computational materials as a vehicle into complexity. Their aesthetics are typically not constrained by a controlled practice but, rather, tend to be emergent unknowns retrieved from systems. Rather than setting forth to construct a preordained form their practice typically involves tending generative machine processes as a way of excavating ideas from the Outside.

Cullen Miller is a sound-system artist, spatial-media designer, and curator. His projects vary in nature but typically fall within the spectrum of sound design, installation, composition, and systems design. Reared in Detroit, he relocated to San Francisco pursuing curatorial work with Gray Area Foundation, SFCMP, and to teach digital signal processing at San Francisco State University. He currently spends his days designing and constructing technical systems at Obscura Digital. He has released recordings under numerous aliases and organizes the concert series, FINITE. His performances and installations have been exhibited internationally in museums, galleries, and clubs.

Gabriel Dunne’s work represents his continuous exploration of visual, audible, and physical frequencies of natural and technological perceptual and imperceptible realities. His process utilizes design, music, sound, architecture, and materiality. Other facets of his practice synthesize and integrate structures and rhythms of the natural world. His work ranges from custom software and hardware systems, performance tools, and physical installations and public intervention. He was born in San Francisco.